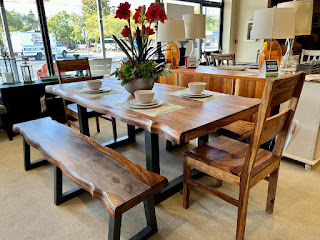 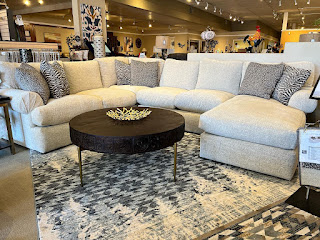 Furniture refers to movable objects intended to support various human activities such as seating (e.g., stools, chairs, and sofas), eating (tables), storing items, eating and/or working with an item, and sleeping (e.g., beds and hammocks). Furniture is also used to hold objects at a convenient height for work (as horizontal surfaces above the ground, such as tables and desks), or to store things (e.g., cupboards, shelves, and drawers). Furniture can be a product of design and can be considered a form of decorative art. In addition to furniture's functional role, it can serve a symbolic or religious purpose. It can be made from a vast multitude of materials, including metal, plastic, and wood. Furniture can be made using a variety of woodworking joints which often reflects the local culture.

People have been using natural objects, such as tree stumps, rocks and moss, as furniture since the beginning of human civilization and continues today in some households/campsites. Archaeological research shows that from around 30,000 years ago, people started to construct and carve their own furniture, using wood, stone, and animal bones. Early furniture from this period is known from artwork such as a Venus figurine found in Russia, depicting the goddess on a throne. The first surviving extant furniture is in the homes of Skara Brae in Scotland, and includes cupboards, dressers and beds all constructed from stone. Complex construction techniques such as joinery began in the early dynastic period of ancient Egypt. This era saw constructed wooden pieces, including stools and tables, sometimes decorated with valuable metals or ivory. The evolution of furniture design continued in ancient Greece and ancient Rome, with thrones being commonplace as well as the klinai, multipurpose couches used for relaxing, eating, and sleeping. The furniture of the Middle Ages was usually heavy, oak, and ornamented. Furniture design expanded during the Italian Renaissance of the fourteenth and fifteenth century. The seventeenth century, in both Southern and Northern Europe, was characterized by opulent, often gilded Baroque designs. The nineteenth century is usually defined by revival styles. The first three-quarters of the twentieth century are often seen as the march towards Modernism. One unique outgrowth of post-modern furniture design is a return to natural shapes and textures.

Jennifer shows off the "Rustic Collection" by Oak Design.  You can see how just changing the wood and stain can have a totally different look even though it is the same style.
LOCATION
395 E. Monte Vista Avenue
Suite A
Vacaville, CA 95688
CONTACT
707-449-6385
Website
Posted by Lainey's Furniture For Living at 7:00 AM No comments: 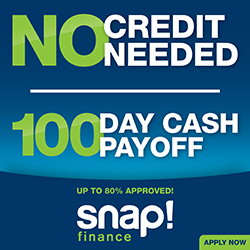 Have a 6 month history with your current employer?

Have a checking account that has been opened at least 90 days?

Deposit at least $1,000 of monthly income into your checking account?

Avoid NSF’s or excessive overdrafts in your checking account?

Posted by Lainey's Furniture For Living at 11:30 AM No comments:

Jennifer shows off the Alexandria dining table from Simply Amish that has hidden leaves to make the table even larger in seconds.
LOCATION
395 E. Monte Vista Avenue
Suite A
Vacaville, CA 95688
CONTACT
707-449-6385
Website
Posted by Lainey's Furniture For Living at 6:00 AM No comments:

History of a Bedroom 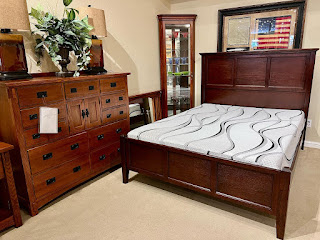 In larger Victorian houses it was common to have accessible from the bedroom a boudoir for the lady of the house and a dressing room for the gentleman. Attic bedrooms exist in some houses; since they are only separated from the outside air by the roof they are typically cold in winter and may be too hot in summer. The slope of the rafters supporting a pitched roof also makes them inconvenient. In houses where servants were living in they often used attic bedrooms.
In the 14th century the lower class slept on mattresses that were stuffed with hay and broom straws. During the 16th century mattresses stuffed with feathers started to gain popularity, with those who could afford them. The common person was doing well if he could buy a mattress after seven years of marriage. In the 18th century cotton and wool started to become more common. The first coil spring mattress was not invented until 1871. The most common and most purchased mattress is the innerspring mattress, though a wide variety of alternative materials are available including foam, latex, wool, and even silk. The variety of firmness choices range from relatively soft to a rather firm mattress. A bedroom may have bunk beds if two or more people share a room. A chamber pot kept under the bed or in a nightstand was usual in the period before modern domestic plumbing and bathrooms in dwellings.
Read more, here.
LOCATION
395 E. Monte Vista Avenue
Suite A
Vacaville, CA 95688
CONTACT
707-449-6385
Website
Posted by Lainey's Furniture For Living at 10:00 AM No comments: 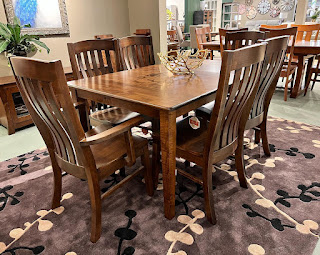 Tables come in a wide variety of materials, shapes, and heights dependent upon their origin, style, intended use and cost. Many tables are made of wood or wood-based products; some are made of other materials including metal and glass. Most tables are composed of a flat surface and one or more supports (legs). A table with a single, central foot is a pedestal table. Long tables often have extra legs for support.

Table tops can be in virtually any shape, although rectangular, square, round (e.g. the round table), and oval tops are the most frequent. Others have higher surfaces for personal use while either standing or sitting on a tall stool.

Many tables have tops that can be adjusted to change their height, position, shape, or size, either with foldable, sliding or extensions parts that can alter the shape of the top. Some tables are entirely foldable for easy transportation, e.g. camping or storage, e.g., TV trays. Small tables in trains and aircraft may be fixed or foldable, although they are sometimes considered as simply convenient shelves rather than tables.

Tables can be freestanding or designed for placement against a wall. Tables designed to be placed against a wall are known as Pier tables or console tables (French: console, "support bracket") and may be bracket-mounted (traditionally), like a shelf, or have legs, which sometimes imitate the look of a bracket-mounted table. 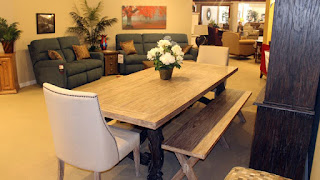 Some very early tables were made and used by the Ancient Egyptians around 2500 BC, using wood and alabaster. They were often little more than stone platforms used to keep objects off the floor, though a few examples of wooden tables have been found in tombs. Food and drinks were usually put on large plates deposed on a pedestal for eating. The Egyptians made use of various small tables and elevated playing boards. The Chinese also created very early tables in order to pursue the arts of writing and painting, as did people in Mesopotamia, where various metals were used.

The Greeks and Romans made more frequent use of tables, notably for eating, although Greek tables were pushed under a bed after use. The Greeks invented a piece of furniture very similar to the guéridon. Tables were made of marble or wood and metal (typically bronze or silver alloys), sometimes with richly ornate legs. Later, the larger rectangular tables were made of separate platforms and pillars. The Romans also introduced a large, semicircular table to Italy, the mensa lunata.

Furniture during the Middle Ages is not as well known as that of earlier or later periods, and most sources show the types used by the nobility. In the Eastern Roman Empire, tables were made of metal or wood, usually with four feet and frequently linked by x-shaped stretchers. Tables for eating were large and often round or semicircular. A combination of a small round table and a lectern seemed very popular as a writing table.[6] In western Europe, the invasions and internecine wars caused most of the knowledge inherited from the classical era to be lost. As a result of the necessary movability, most tables were simple trestle tables, although small round tables made from joinery reappeared during the 15th century and onward. In the Gothic era, the chest became widespread and was often used as a table.

Refectory tables first appeared at least as early as the 17th century, as an advancement of the trestle table; these tables were typically quite long and wide and capable of supporting a sizeable banquet in the great hall or other reception room of a castle.