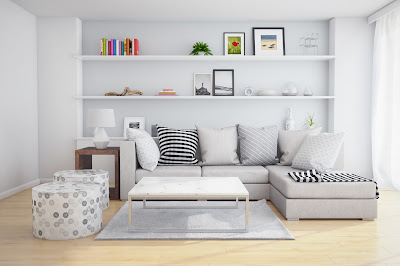 Modern means "in the current time," at least to some people. So, there are people who think that modern furniture has to be brand new. Some even think that it has to be styled in a sleek, futuristic sort of way to reflect the ever-changing times. By that definition, any furniture that looks a bit ahead of its time could be considered modern. However, the truth is that the term "modern furniture" actually refers more to a school of design.

That school of design is called "modernism". The modernism movement began with designers who wanted to emphasize function over form. However, these days, this style is not just about function. It is a form of functional modern art.

Pieces of furniture that are done in the modernism style tend to use many different materials. Metal and plastic are popular options because they sleek, clean lines and can be molded to any shape. However, this style of furniture pieces can also contain plywood and many other material.

Contemporary pieces can also be defined as a group. For example, an antiques expert who came across several pieces of furniture from the 1920s could call them "1920s contemporary". However, a person who came across several 1990s pieces at a yard sale could call them "1990s contemporary", too. So, this style isn't just furniture done in one style or era. Nevertheless, most people think of contemporary furniture as done in their own time. So, by that definition, anything done in the modernism style could also be considered contemporary to some people. After all, current trends do lean towards both functionality and style.

When referring to modern furniture and contemporary furniture, the place from which the product originated is also important. For example, items made in present-day China is considered to be Chinese contemporary or modern Chinese furniture. A similar thing would be true for Japan, the USA or any other geographic location.

Current pieces generally utilize glass, metal and chrome for shiny and clean features. Modern contemporary pieces are also usually smooth and use sharp lines and angles. However, that depends a great deal on where in the world the furniture comes from. For instance, European, American and Japanese contemporary furniture are all quite distinctive and different from one another.

The Japanese Influence: Both modernism and the current wide-spread contemporary design movements have been greatly influenced by Japanese interior design. The western world was first exposed to Japanese design at the end of the nineteenth century and the styles of Japan have been influencing western furniture ever since. Nowhere is the Japanese influence more obvious than in one of the most famous pieces of modern furniture to date. It is a coffee table that was designed by a Japanese-American named Isamu Noguchi.

The Noguchi coffee table is a modern marvel of form and function, merging both Japanese and American elements. Isamu Noguchi also had a background in architecture, which certainly had an influence on not just the famous Noguchi coffee table, but also many other furniture pieces.

The German Influence: Of course, moth modern furniture and contemporary furniture have been influenced by other cultures as well. In fact, the German culture has had a huge influence on schools of design. During the 1920s, Germany was home to many of the greatest furniture makers. They worked at the Bauhaus school and they each paved the way for the furniture to come in later decades. The Werkbund in Germany also produced some revolutionary pieces in the modernism style.

A Merging Of What Came Before: So, although both styles can be quite similar, they can also be quite different. It depends on how you define them. Nevertheless, they do have several things in common. The biggest of which is that they are a merging of what came before. In other words, both pieces take their influences from many of the greatest furniture designers and design eras of the past.

Even though they now feature things like clean lines and injection molding techniques, you can still see traces of other design movements in them. Therefore, both contemporary furniture and modern furniture aren't just defined in words. They're also defined by a rich and wonderful history.